Strangers #14 and #15: Eating cheap and thanking by giving

Lately, I've been feeling extra-blessed. Good news keep coming my way and the people I've been interacting with emanate with so much positive energy. And so I thought, as a way of thanking God for all these, why not pass the goodness forward, even to strangers? Differences in faith aside, isn't that a good way of spreading love? Or at least some positive vibrations in an effort to make the world a better place? 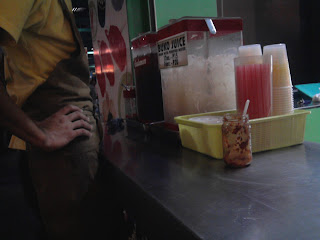 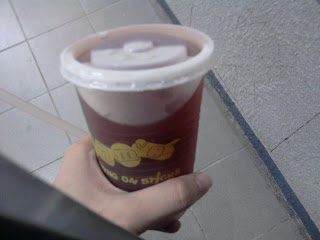 In my country, commuting provides a lot of opportunities to eat. Most jeepney and bus terminals here are meccas of cheap food and cheap cooling drinks. Last Monday, I felt I had to do something special for a stranger because aside from receiving a lot of blessings to thank for, I realized that I had been pretty lax about my own advocacy (which is exercising kindness). At around 6pm, feeling hungry after about an hour of walking and transferring from one jeepney to another, I opted to rest for a while and have my fill of kwek-kwek and gulaman. Before walking home, I made sure to buy a cup of gulaman which I would then give to a stranger. With the cup of gulaman in my hand, I crossed a bridge and saw one security guard watching the traffic below us.Seeing the guard, I really felt he needed a drink. I walked towards him and offered him the gulaman. He smiled and politely declined. Sensing that he was being modest, a trait quite common in our culture, I insisted. With a smile on his face, the security guard soon took the drink and repeatedly said thanks.
Yesterday,  three days after giving him gulaman, I saw the security guard once again. I smiled at him because there was a hint of recognition on his face when I passed by. It felt nice.
And a while ago, I was once again eating at a jeepney terminal when a young boy asked me for some spare change. I didn't have any, but I had just ordered kikiam after getting my stick of kwek-kwek. That's what I gave to him instead. The little boy thanked me and ran away with the plate of kikiam in his hands. A few minutes later, I heard him calling me while he was standing in the rain. "Ate!" (Ate means "sister") he said. The boy had the cutest smile on his face; I felt my heart melting! He really wanted me to give him coins, but at that point, I had already decided not to give coins to kids anymore. Just food--so I can be sure that the kids will be getting what they really need.
So there! I hope I was able to pass on to you some good vibrations! (I can't find better words today. Haha!)
Make a stranger happy soon? Please? <3
Optimistic, happy, and full,
Micah
Posted by Tata at 10:58 PM

Change the world! How to participate in 500 Strangers:

1) Do something kind specifically for a stranger.

No one's limiting your creativity on this. You can give candies, bus passes, free dinner, hugs, extra time, etc! You can also do something kind for a group of strangers. Basic requirement: JUST DO SOMETHING KIND FOR A STRANGER/

Get out of your comfort zone. Be kind. Give. Share.

2) Share your story by sending it to fivehundredstrangers@yahoo.com. (though it isn't required, you can also include photos and videos documenting your random act/s of kindness)

Multiple submissions are welcome! Repeat steps 1 and 2 as many times as you want. :)

500 is a challenge, but it can be done. Let's help make the world become a kinder place, why don't we?

"The people who are crazy enough to think they can change the world are the ones who do." -Jack Kerouac

Kindness will never fail you